So my idea for an eggplant cake worked! It was actually very tasty and I was rewarded with a second place finish at the Loomis Eggplant Festival. Picture of cake and the recipe to come after my camera batteries recharge... The official title was Eggcellent Eggplant Torte with Eggplant and Walnut Filling. I won $25 at Newcastle Produce, which is kinda nice actually because the place has a deli and $25 would cover a meal for two. Who's in? :) 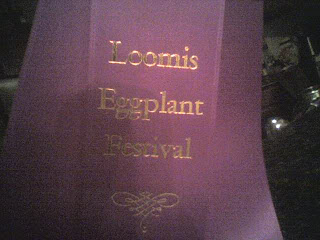 Pic of ribbon, courtesy of the cakegrrl cameraphone.

Tomorrow is the first of three pumpkin recipe contests I will be entering this year. Then, up to Amador tomorrow afternoon to visit some of my favorite wineries.
Love & Sugar xoxo cakegrrl2007