In honor of Chinese New Year, a friend and I had dim sum dinner last night!

Normally dim sum is not served for dinner, but I am a "breakfast-for-dinner" kind of gal, so we called New Canton, and they were happy to put a to go order together for us because we ordered in advance! :) 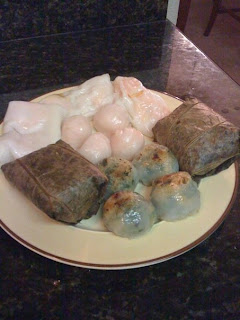 Pictured items are: (My fave) the lo mai gai--the sticky rice in the lotus leaf. (Those are the green squares in the pic)... other items: Shrimp Har Gow (the little spherical ones), Shrimp Cheive Dumpling (between the lotus leaf rice), and the Shrimp rice-noodle roll (looks like fried egg). 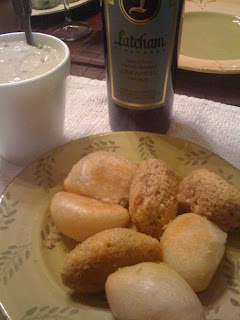 Deep Fried Pork Dumpling (smooth little footballs) and Deep Fried Stuffed Taro Dumpling (flakey little footballs). Also in the pic is a bottle of Latcham Zin, and an order of Congee (thick rice porridge) with Thousand Year Egg. I tasted this stuff, and it is the texture of homemade gravy (gravy and biscuits). I don't think I could eat more than a few bites because it is very filling, and I like the other items we had more than the congee. BTW, Thousand year-old egg is not really one-thousand years-old, it is just a preserved egg, and that is the other name it goes by... It takes only about a hundred days to create a thousand year-old egg. So technically, it is just a 100 day old egg... but, one thousand years is better name for marketing, don't ya think? :) 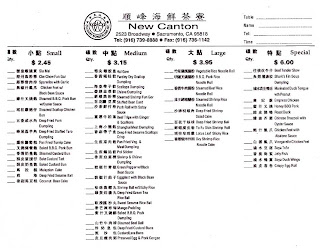 For your convenience (and for my future reference) here is the New Canton Dim Sum menu.
Love & Sugar xoxo cakegrrl2007