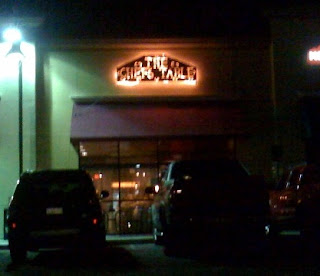 Last night, CC & I had a chance to meet Chef David Hill and have dinner at his bistro, The Chef's Table, located in Rocklin (near the former Melting Pot and Anatolian Table). It was almost a full house when we arrived, and by the time we had our food, the bar was lined and all the tables were full of patrons. If you want to get a seat in this place, you'd better have a reservation. 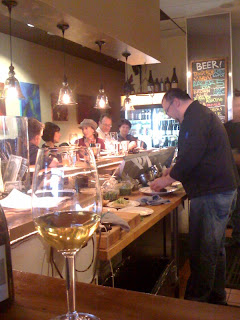 I could tell that some people were regulars, but there were a few in the crowd that had never been to the restaurant before (as I was asked on my way out what I recommended). It gets a little crowded in the dining area, but no one seems to mind. Chef Hill (who also teaches part time at Le Cordon Bleu in Natomas) never appears to be nervous or phased by an oncoming mob of hungry diners, he just seems content and happy. 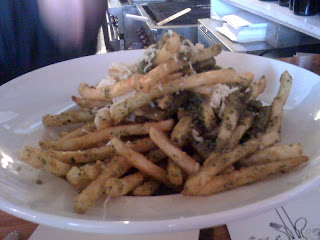 We ordered the pesto fries I have been hearing so much about. If you thought pesto was good on pasta, it's even better on deep fried potatoes and topped with cheese. The dish is large enough to share and does it's job as an appetizer. It makes you want to taste more of what is on the menu! As I write this, CC is reheating the leftovers in the toaster oven and the smell is intoxicating. ;) 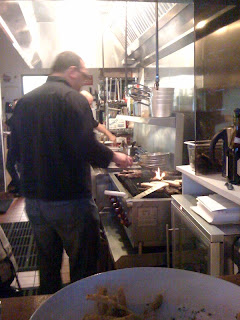 Here is what my view was from where I was seated. I really enjoyed watching the interaction of the servers, cooks, the chef with the customers. At the bar, it's almost as if everyone is at the same table. 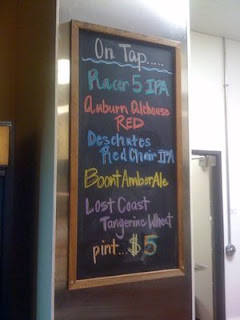 Some of the beers on tap on any given day... Every Friday and Saturday from 4pm to 6pm there are $3 pints! Last night CC ordered the tangerine wheat beer. It was not too sweet or fruity. It would have even gone with my meal (below). 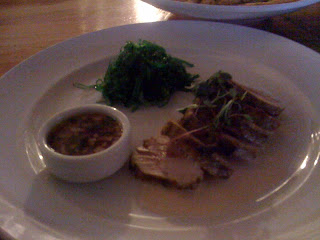 I tried the Seared Ahi Tuna with Miso Sauce and Wakame Seaweed Salad. I wanted to keep it light after having some of those fries! There is a nice mix of small plates, salads, and larger plates on The Chef's Table's menu. Nothing stays on the rotating menu too long, and most items are locally sourced. 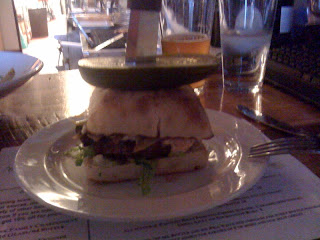 CC was tempted to have the Grilled Angus Flank Steak because the last burger he tried (at a restaurant that will remain unnamed) was disappointing. But, in true hamburger love and devotion, he ordered the Painted Hills Pimento Cheeseburger with Carmelized Onion & Dijon Aioli, served on a Ciabatta Roll. The burger comes with the knife spearing a dill pickle. CC was rather delighted in this "sword in the burger stone", and his faith in burgers is restored. He is also reheating the other half right now. How am I supposed to lose weight for the Celebrity Chef Event like this? Sigh.

The dessert options described to me last night included a strawberry topped scone (a shortcake-like treat) and a pie with a Girl Scout cookie crust. The desserts are seasonal and also rotate. So you won't get a menu, but do ask if you want something sweet. Most likely it will be house-made and not your average cheesecake or creme brulée.

Also good to know: Currently there is buttermilk fried chicken dish on the menu (that has a special three-day preparation: two day brine and one day milk bath!), and comes with mashed potatoes and bacon gravy. The gentleman beside me selected the halibut fish & chips with caper tarter sauce and it came out looking pretty spectacular. Also, one of my wine industry friends who had dinner there last night tried the lamb chops and gave rave reviews.

Food is not the only art at the Chef's Table, as some of local painter Michelle Brunmier's work is displayed on the walls.

Soon, some of the sauces, dressings, and a variety of other items (can I hope for bacon gravy body spray??) will be available at The Chef's Table. Just kidding about the body spray, but I bet you'll be able to buy the special steak sauce that Chef David makes.

Stay tuned, because Chef David will be featured in an upcoming "Hail to the Chef" post here on cakegrrl.com in the very near future.

To make a reservation at The Chef's Table, click here. The website is connected to the Open Table reservation system. Become a fan on Facebook here.
Love & Sugar xoxo cakegrrl2007