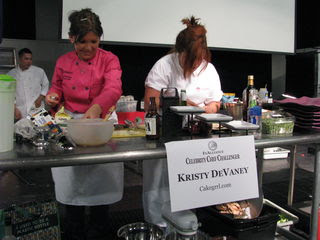 So I am sitting here trying to put my feelings into words about being competing in the Celebrity Chef Event to benefit InAlliance last Friday night.

I got involved with the event last year when I promoted it on my blog and set up a cakegrrl booth. Last June, I handed out ice cream sandwiches and 3 kinds of cupcakes: red velvet, cookie dough, and maple bacon. At the event, I networked like crazy. I had so much fun. I kept a relationship with the event organizer, Jessica Bean. I had pestered her to death about being the amateur competitor last year, and she agreed to let me participate this year. 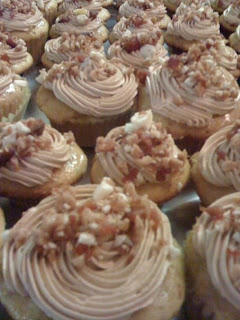 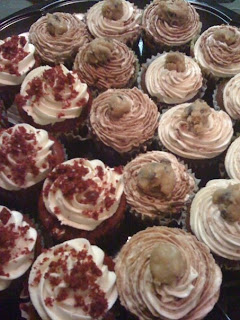 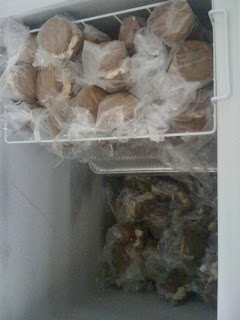 Above: My items from last year's booth.


The event got moved to take place a little earlier this year so that it would not conflict with other major food and wine fundraisers that take place at the same time the event was held last year.

This year, as a cheftestant, I also agreed to donate goodies for the show! :) This year, I made Margarita Lime Squares, Pink Champagne Cake Truffles, and Pink Cloud Buttercream and Chocolate Espresso Buttercream "shots" with animal crackers.


Below are pics of the Champagne Cake Truffles and the Margarita Lime Squares (prototype shot) I made for this year: 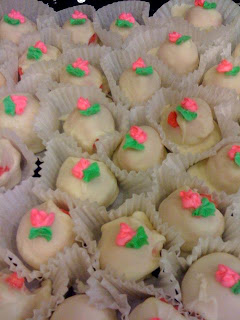 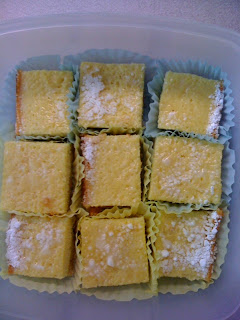 I arrived at the event at about 4:30 and my lovely blondies Tessa and Sara helped me load in all my booth items as well as all the cooking supplies I brought to compete. My super awesome sidekick sous chef Tammi also helped lug in my mixer, ice cream maker, chocolate melter, and also brought her own arsenal of kitchen tools. Awesome purple presentation plates included!

How did I feel? Hmmm... Well, I knew I had no chance of winning. I was there because I drew a lot of people to the event through my website and promotion. I was a little nervous, but only because a lot of Sacramento food people were there and I didn't want to embarrass myself by not finishing the "3 dishes in 45 minutes using 5 ingredients" guideline. So, really nothing to lose, so my stance was that I was a winner if we could just finish the challenge on time.

I was a little antsy to get going and get it over with! But that was just nerves. The event was set up in such a clever manner!! Each chef's start time was staggered by 10-15 minutes. I was set to cook third. By the time we started collecting our ingredients and prepping, I was so focused that I was not even thinking about the audience or the pictures being taken of me, or even the hosts asking me questions from time to time. My only focus was to finish!

Points were given for an entrance with flair, Tammi and I sprayed cans of pink silly string to resemble buttercream frosting being piped in the air! 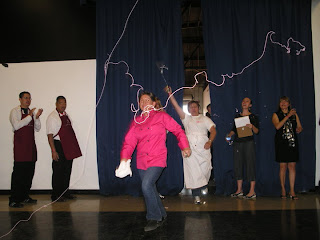 The secret ingredients were: Leg of Goat, Petit Basque Sheep Cheese, Wild Mushrooms, Papaya, and Steelhead Salmon/Trout/Salmon/Trout... the debate is still on... will someone please clear this up??.

Though I had never cooked with goat, the secret ingredients were not the tough part of the challenge for me.

The biggest distraction for me were all the other WONDERFUL pantry ingredients we were given to use. There was so much produce available––from avocado to tomatoes to fiddlehead ferns to blue potatoes––it made it really hard to decide what I wanted to execute. In a competition like this, you have to quickly decide what is even possible to create in the time you have. You have to know the ratio of the recipe in your head. You have to be able to just COOK. To wing it. Luckily, that kind of thing makes me tick.

In the 30 or so minutes before we were introduced and the cooking began, Tammi and I bounced a few ideas off one another. What would we make? Earlier in the week, we had been given a clue that we might have to work with goat meat, and I decided that I no matter what, would treat it like I would a lamb preparation. But a cut of leg might be tough and thick... Also, we were given a clue via email that one of our secret ingredients contained an enzymes to tenderize meat. So, for the goat meat, I decided to make a papaya seed & curried yogurt marinade. I just scraped out the seeds of the papaya with my hands and put them in a bowl with a tub of yogurt. I added a liberal amount of curry powder and garlic. I quickly chopped the goat meat into bite-size-ish pieces and tossed them in the marinade.

Meanwhile my sous chef had broken down a papaya and pureéd it in a food processor for my use in the dessert we planned to make. I brought my ice cream maker and knew I could make some sort of sorbet/ice cream/smoothie happen in the amount of time we had as long as I got the mixture going fairly soon into the start time.

I took the papaya pureé and poured about a cup of heavy cream into the mixture. To that, I added about an ounce or two of blood orange infused vodka and about 3/4 to 1 cup of raw sugar. I stirred the mixture to incorporate fully, and then poured it into my ice cream freezer... Which, by the way, I had stored in the California Auto Museum's kitchen freezer, and I had to run offstage to fetch! :) At least I got my cardio in for the day...

I assembled the ice cream freezer and got the mixture going, spinning around and getting icy cold. Then it was back to the goat skewers. It had been about 10 mins, and luckily the papaya/yogurt mixture had really done its job tenderizing & flavoring the meat! I began assembly of the goat and vegetable kabobs I planned to make.

I looked over at what Tammi was doing and to my delight, she had totally taken control of one of the dishes. She had cooked some of the steelhead salmon and made it into a ravioli filling. She had brought some dumpling/wonton wrappers to use, and a ravioli press. So quickly she fashioned the salmon filling into some fancy schmancy raviolis.

Meanwhile, I used fresh rosemary sprigs to skewer the marinated meat, some cherry tomatoes and wild mushroom caps to put on a little portable grill I had brought. Maybe you have heard of this grill? Wait for it... The George Foreman grill, baby!! Version 1.0!! *audience cheers*

I seared the meat on the grill and watched it carefully, as well as coming back to check on my dessert, and helping Tammi start the cream sauce for the raviolis.

Here is where my biggest failure came in. I could have started a risotto or a rice with wild mushrooms just before I put the meat on to grill. But, in my mind, I had three dishes going, so I wasn't thinking any further on from that. Whhhy Kristy, whyyy??? :)

Below is the plate that came together with the three dishes: 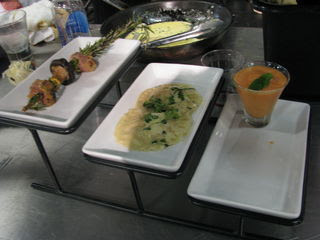 
Now looking back, I can see the presentation looks a little... well... naked. :(
The food was great and we finished on time, but the presentation was a little lacking. If Tammi had not suggested I use some fresh mint springs on the sorbets, I would have left them off, too. Oopsy. Plating was just not something I was focused on. A lot of this is inexperience. Once again, I was just focused on crossing the finish line and making it taste good, even if I had to stumble across. :) Tammi produced the most professional looking dish with those raviolis.

So now I just want to say how honored I was to even play! Each chef cooking that night does it everyday for a living. I am just a semi-pro home cook who does work based on word-of-mouth. I know what tastes good, sure... but my skills (especially plating!!) are rough and unrefined compared to each of the other contestants. I happily lost the competition to people who really deserved to win. I read a review of my dishes by one of the judges and it was a really scathing run down of all three. I don't really have a response to it other than this: 1. I was proud of the food I made or I would not have presented it. 2. I have never cooked in a competition like this before. 3. Oh yeah, and I have never even cooked professionally before (did I mention that?) other than a 6 month stint at RH Phillips winery (only cooked there on call once a month). Sigh. I was a contestant because I wanted to help a good cause.

1st place: When I saw Chef Russell Michel's food being plated, I just melted over how pretty it was to look at alone!!

2nd place: Teresa Urkofsky is a culinary teacher so… I would hope someone who teaches people to cook would win a cooking contest, you know? :) I am also glad the only other female took second!

3rd place: Chef Q has years and years of experience delighting people's palates at events both large and small. I remember his booth a few years ago at the Grape and Gourmet event! As I write this, I was able to get a description of the dishes he made that evening: Chef Q prepared a potpie with the fish, goat stew with rice and fried cheese with strawberries and papaya compote, vanilla bean whip cream.

We were all given little framed shadowboxes with toques in them to commemorate our participation. Just awesome. I feel nothing but blessed to have been a part of this event and will be involved in any way I can for years to come. 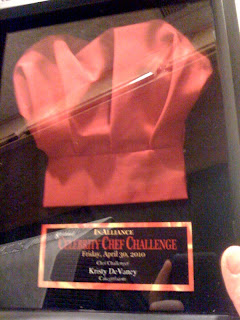 If you have a moment, please go here and vote for InAlliance. Vote for the most refreshing ideas to win Pepsi Refresh Project grants for Health. The top two ideas get $250,000 in funding.
Love & Sugar xoxo cakegrrl2007