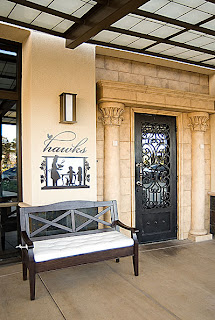 Friday night, I finally had the chance to return to one of my favorite dining spots in the Granite Bay/border of Roseville area, Hawks Restaurant. I have visited them about once a year since their opening in 2007. Almost three years later, the place is still as elegant as when I first saw it, and the interior just as beautiful. There is a warm and romantic feel about the blue and brown color scheme I really find attractive. 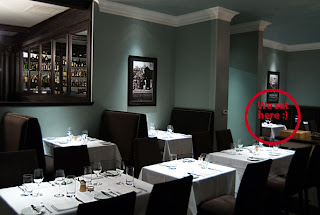 The sentence "We serve Modern American Cuisine with an emphasis on using seasonal and local products" can be found on the Hawks Restaurant twitter page in their profile description, and I can attest to the statement being true. Everything tasted on Friday night could not enjoyed as much at another time of year and many ingredients were pulled right from nearby farms. 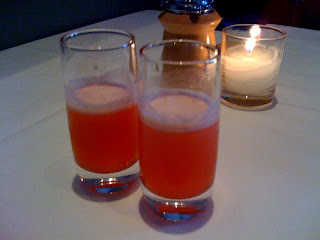 The evening kicked off with some bubbly strawberry creme soda that played the part of amuse bouche. To continue with the libations, CC decided on the Hawks Ale, and I went with a glass of Acrobat Pinot Grigio. My white wine worship continues… I almost went with a Sobon red, but it was so warm Friday night. I go through this indecision at almost every dinner during summer. 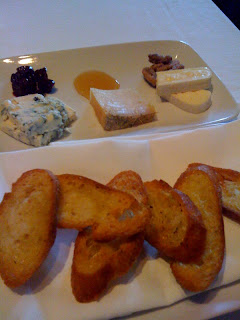 We ordered the cheese plate, which normally appears on the dessert menu (but on Friday was highlighted as an appetizer). Either way, I probably would have insisted on it. I really crave cheese since I haven't been eating sugar as much. The plate features robiola bosina, cow’s and sheep’s milk, paired with candied pecans, pecorino affinato, a hard sheep's milk cheese also Italian, and paired with honey, and the third cheese was a Cedar Ridge shaft’s blue, Ellie’s 2 year reserve, cow’s milk, and paired with sweet cherries. The plate also comes with crostinis, or you can slather the bread you get at the beginning of the meal with the cheese instead of butter like I did. Is that wrong? 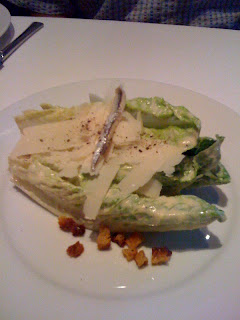 The salads we picked before our entries were a standard Caesar salad... which was by no means standard--Anchovy garnish and parmesan cheese --menu says "shaved", but let's be fair, they were generous "sheets" (yum!) of cheese on the top with a thick and creamy dressing. 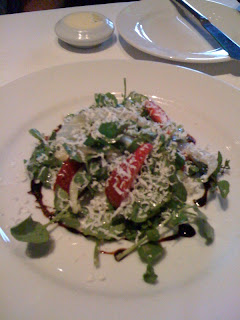 This is the watercress and fennel salad featuring Saeng's strawberries, a local grower who sells their strawberries at a stand on the corner of Douglas and Barton (less than a mile from the restaurant). #gotherenow :) The salad is finished with ricotta over the top. CC used to eat lots of watercress growing up--it grew wild outside his grandparents' house--so he especially liked this one because of the good memories that came flooding back. 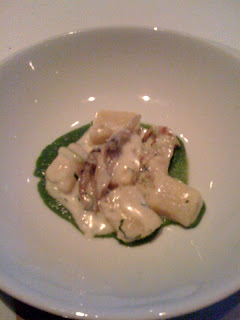 The next thing we tried was the housemade gnocchi. Tender little puffs with green garlic and morel mushrooms, and finished with a parmesan cream. Loved the pasta. To be honest, this was the only time I reached for the salt. (By the way, it is sea salt on the tables here, and not the iodized stuff at most restaurants). These are the little touches for which I am grateful. 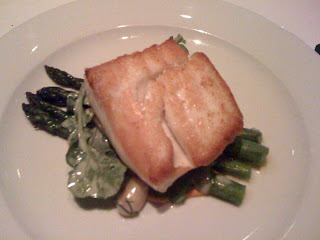 For my main course, I chose the Wild Alaskan Halibut. It was served with asparagus and butter beans on a little bed of romesco sauce. It hardly needed any sauce. The fish was perfect (great sear on the outside and flaky without being dry on the inside). It's the next best thing I have had to the Lake Erie walleye I used to have in Ohio that I can't find out here. The plate was so pretty when it came out. Loved my side of beans. I am also addicted to beans as a side or in the main course and rarely pass them up if I see them on a menu. 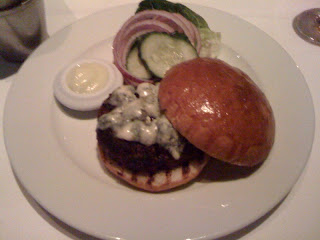 CC chose the Hawks burger. It comes with pickled cucumbers and your choice of cheese--and I influenced him to choose bleu. You can also have bacon on top if you wish. It was excellent, and I think the bacon would have been too much. 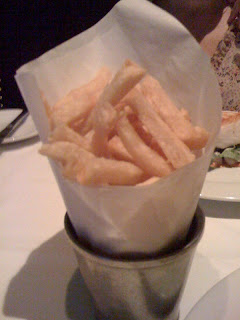 Here are the fries that come with the burger. Crispy on the outside, but thick enough to be substantial. That's just the way I like them, but sadly, I only had two. :( 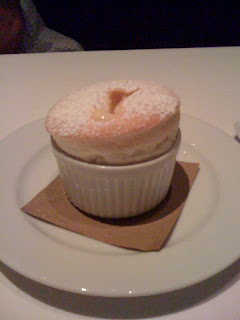 I was ready to pass on dessert completely because I had overdone it with the cheese plate at the beginning of the meal, but my dining companion made a loving remark about the Grand Marnier soufflé that was on the menu, and so it was to be. It also comes with a little table presentation, the server pokes a little hole in the top of the dessert and pours in the sauce, saving a little for the side.

I am not typically a fan of other people's dessert (I think it is usually that way when you can make things yourself). But I have to say that this dessert, along with the one I tasted two weeks ago done by Elaine Baker, were phenomenal. The soufflé had an accent of lemongrass, and it was probably a million calories, but you just couldn't tell because it was so light and non-cloying. I will even risk recommending it to chocolate lovers. You won't be let down if you make a switch just this once. Because, you know, if you read below… 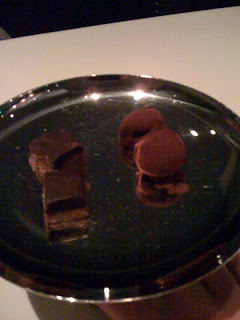 …You get chocolate with your bill anyway! There were four little housemade candies (there's that word again--housemade (because Hawks doesn't like to take shortcuts!), two for both of us. Just another nice touch.

Special thanks to Rob for putting up with us/taking care of us throughout the meal.

FYI:
Hawks also does a Chef's Grand Tasting with seven courses prepared for the entire table for $80, and an added sommelier wine pairing for $35.

Also, there will be a special Father's Day menu. Call for info, their number is below.


Interior photos above were taken from Shawn E. Hall designs. All other pics were taken with my iphone.
Love & Sugar xoxo cakegrrl2007