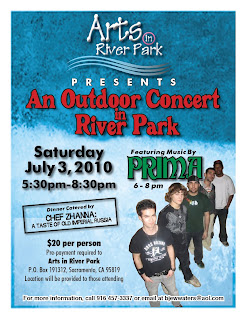 The Band: PRIMA has been together since 2008. Band members consist of Tyler Phillips (Rhythm Guitarist and Vocals), Sam Rogers (Drums), Sean Iwata (Lead Guitarist and vocals), Eddie Miller (Bassist), and Pej Ahmadi (Lead Vocals and Keys). They play their own material, as well as cover music from Jason Mraz, Carlos Santana, Queen, and more.

Dinner will be catered by Chef Zhanna: A TASTE OF OLD IMPERIAL RUSSIA

Chef Zhanna is a long-time Culinary professional having her last assignment before coming to Sacramento, at the Russian Consulate in Houston, Texas. Although her name is "French" she is an Armenian by heritage and Russian-speaking. She served the diplomatic corps as Executive Chef having previously achieved international notice for her life-long love for creation and presentation of beautiful and delicious meals.

The bill of fare on her menus is anchored in East European traditional dishes. Chef Zhanna is famous for her Eggplant Caviar, and of course her marinated Lamb Kabob entrees. Her light-fruit cakes and other deserts are an elegant essential to the perfect conclusion of any of her meals.

Since coming West, Chef Zhanna has already a large following of Sacramentans who find her at Kavkaz Restaurant on 5500 Watt Avenue in North Highlands, across the street from McClellan Park.