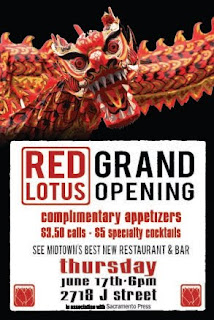 Sacramento, CA – One of the worst recessions in history and California’s own
economic uncertainties aren’t stopping a local restaurateur from bucking the trend of
downsizing and restaurant closures to offer another culinary choice to diners in Sacramento with discriminating tastes.

Red Lotus, on the bustling block of J Street between 27th and 28th Streets, serves
Chinese food with a modern twist. Chef/Owner Buu “Billy” Ngo is known for his highly rated Kru Japanese restaurant and his 2007 title as Sushi Master.

“With Kru reaching its stride, I was ready to offer Sacramento my interpretation of
Chinese food,” says Ngo. “We’ve priced every item at $15 or less and the menu ranges from selections diners are accustomed to, like chow mein and fried rice, to adventurous items serious foodies are looking for, like roasted bone marrow and tongue.”

Following two months of “working the kinks out,” Red Lotus will host its official grand
opening from 6pm-2am, on Thursday, June 17.

“We wanted to open soft, get the feel and menu down and, of course, build our bar
program,” says Ngo. The bar, or “Mixology” program at Red Lotus, was built by master Mixologist Erick Castro. An instructor at San Francisco’s Beverage Academy, Castro has made a name for himself among the nation’s top Mixologists. He conceived the Red Lotus bar program to include specialty spirits, all fresh squeezed juices, sheet ice and – emphatically -- “no sweet and sour.”

“This is a world-class bar right in Midtown Sacramento,” states Castro.
A ribbon-cutting ceremony will commence at 7pm. Thursday’s Grand Opening will
feature a traditional Chinese Lion Dance, and free appetizers. The most popular cocktails will be $3.50 and specialty cocktails will be $5.00.

“We really want the dining public of Sacramento to see, smell and taste Red Lotus to
decide if they like it. This grand opening is the perfect place to do it,” says Ngo.
Admission to the grand opening is free and the public is invited.