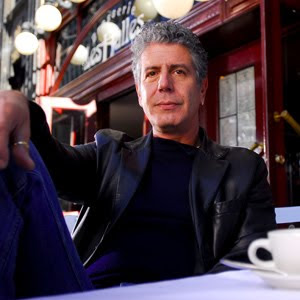 Sacramento, make room at the table for the Bad Boy of Cuisine. Anthony Bourdain is coming to the Memorial Auditorium on Friday, September 17th. Bourdain recently released his book Medium Raw: A Bloody Valentine to the World of Food and the People Who Cook on June 8th, and is an internationally acclaimed chef as well as the host of Travel Channel's “No Reservations.”

Bourdain, the executive chef at New York's famed bistro Les Halles, is the author of the bestselling Kitchen Confidential: Adventures in the Culinary Underbelly, a candid, hysterical and sometimes shocking portrait of his life in restaurant kitchens that has been translated into over 28 languages.

In his newest book, Bourdain pulls back the curtain on all of the big-time personalities of the modern gastronomical revolution, as only Tony can. Other books include Anthony Bourdain's Les Halles Cookbook, The Nasty Bits and No Reservations: Around the World on an Empty Stomach, an illustrated journal of Bourdain's travels.

A contributing authority for Food Arts magazine, his work as appeared in The New Yorker, The New York Times and Gourmet. He has shared his insights about team building and crisis management with the Harvard Business Review.

“No Reservations,” nominated for an Emmy Award and widely popular all over the world, is currently in its fifth season, Bourdain continues to travel to the farthest reaches of the globe, exploring destinations from rural Laos to New Orleans.