The Sacramento region is now home to some of the best food in the world. Despite the rough economy, there have been several new restaurants that have opened in the past few years that have managed to be a success.

One of the ways restaurateurs have brought customers in is by offering happy hour specials, sometimes seven days a week. Then a website was born to capture and showcase these happy hours called Sac Mix. 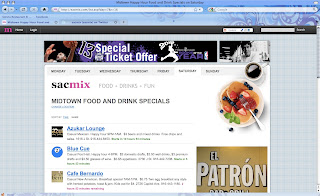 Oh thank you, Sac Mix. You introduced me to Suede Blue in Roseville, and it is one of the best deals in town (outside of Sacramento) right now! FYI, you can also find Sac Mix on twitter here.

The same people who brought us Sac Mix has a new Facebook page called Sacramento Restaurants. 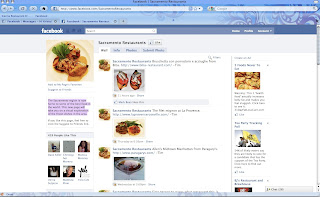 You can "like" Sacramento Restaurants on Facebook and be notified of contests/giveaways on the page. There's also some general eye candy that's sure to make you salivate! If you are on Facebook, be sure to check it out!
Love & Sugar xoxo cakegrrl2007