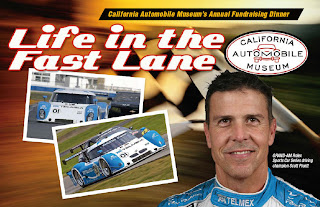 Share “Life in the Fast Lane” at California Automobile Museum’s Annual Fundraising Dinner
Scott Pruett, 2010 Rolex Grand-Am driving champion and one of the nation’s most successful  racers who has won multiple titles and races from Daytona and Indianapolis to Le Mans, will be the keynote speaker as the California Automobile Museum hosts its annual fundraising dinner on Friday evening, November 5.
Pruett claimed his third championship in one of the nation’s premier sports car series while setting a record for the most wins in a single season and becoming the biggest overall race winner in the history of the Rolex Grand-Am series.
But 2010 was just one stellar year for the driver from Auburn, CA who began his career in karts before winning championships and races in the top ranks of racing in a career that spans NASCAR, Indy cars and exotic prototype sports cars.  That includes an Indianapolis 500 co-Rookie of the Year honor and winning two of the most demanding and prestigious sports car races in the world, the 24 hours of Daytona (seven times) and the 24 Hours of Le Mans.
“Scott Pruett certainly has seen the world of automobiles from a perspective that most of us only read about or see on television,” said Karen McClaflin, Executive Director of the California Automobile Museum.  “We will almost be a co-driver in the car as we learn first hand what it is like to race and win at the top levels of the sport, including at some of the most famous race tracks in the world.”
“The evening will also help us raise funds so that we can continue our 28 year tradition of education and entertainment to preserve the culture of cars in Sacramento,” said McClaflin.
Tickets for this fundraiser, which will begin at 5:30pm and includes a cocktail hour, catered dinner and live and silent auction, all emceed by Nick Toma of Good Day Sacramento, can be purchased for $60 per person by calling (916) 442-6802 or by visiting www.CalAutoMuseum.org   Reservations are requested by October 29, 2010.