Thanksgiving Dinner in a Cake, Kind of My Ode to the Cherpumple 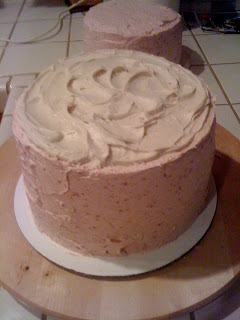 A few days ago, I was contacted by Girls on the Grid for a Thanksgiving Day recipe round-up. They asked "what is your favorite Thanksgiving Day dish, and do you have a recipe to share for it?"

Since I couldn't decide on just ONE, I tried to cover all the bases, and this cake was born. In it, I used several components of a traditional Thanksgiving Day meal and created something fairly non-traditional. To some, this might look and sound like an atrocity, but it tastes really delicious. As the title of this post states, it was inspired by the Cherpumple. Thank you, Charles Phoenix!! :) 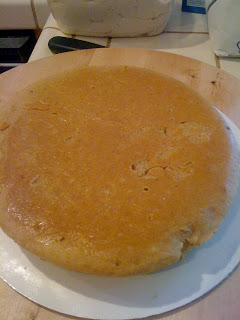 Brushed the layer with a syrup I made from Wild TURKEY, corn syrup, & vanilla.

Then I spread a layer of CHESTNUT buttercream over that....

Then next was a layer of YAM and PUMPKIN cake (sorry, no photo). This layer was also flavored with cinnamon, nutmeg, and ginger, with some clove as well. Used brown sugar in this recipe.

The cake layer was also given the Wild TURKEY treatment.

I topped this layer with CRANBERRY buttercream. 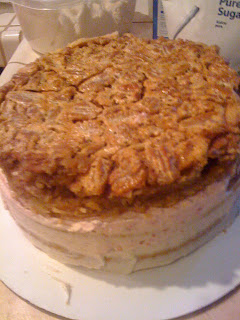 Ah yes, and then there is the pecan pie layer. Yes. That is a whole pecan pie sitting on top of the cake we have constructed so far... The pie was topped more Wild TURKEY and then some CHESTNUT buttercream over it. 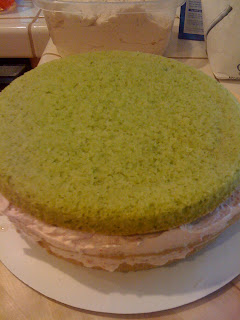 Then a layer of PEA and MASHED POTATO cake. Followed by another round of Wild TURKEY syrup and then the CRANBERRY buttercream again. 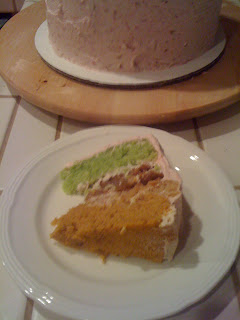 So that's apple, corn, yam, pumpkin, chestnuts, turkey, cranberry, pecan pie, peas, and mashed potatoes! Alas, there's no gravy or ham, or bacon :( in there, but still quite a meal!!

Recipe to come... look for it this week on the Girls on the Grid website and here on this website! Happy Thanksgiving week, everyone. Be safe!
Love & Sugar xoxo cakegrrl2007