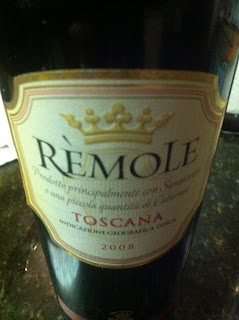 The Marchesi de' Frescobaldi Remole is a Sangiovese/Cabernet Sauvignon blend that retails for about $10. It's 85 percent sangiovese and 15 percent cabernet sauvignon, no oak, and contains 12.5% alcohol. It was kindly sent to me for my review, and it rested in my wine rack for quite sometime before I decided to open it. It is light red in color, and a little too bright for my drinking on it's own, so I used it in a recipe and paired it with the food for an enticing experience (especially for steak lovers).
I basically took a couple filets, seasoned them with sea salt and some garlic powder, wrapped bacon around them, and then efrigerated them a little while after seasoning--about an hour. 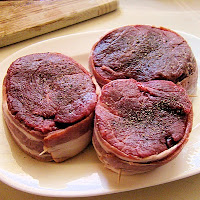 I preheated my oven (375 degrees) and melted some butter in a skillet, allowing it to get hot enough so that the pan will sear the steaks. After searing them on both sides, I put them in the oven in a casserole-type dish.

With the nice meat juice that remained in the skillet, I added more butter and a few chopped shallots. After the shallots turned translucent, I added almost a cup of the Frescobaldi Remole and 2-3 springs of thyme. Then I raised the heat to reduce the sauce.
I took the steaks out of the oven before they were done, as they continue to cook after being removed. I let them rest for about 5 minutes, and then plated them, and then covered them with the wine sauce.
My assessment: Marchesi de' Frescobaldi Remole, for optimal results buy two bottles so you can drink it while cooking with it! You can find it here.
Love & Sugar xoxo cakegrrl2007