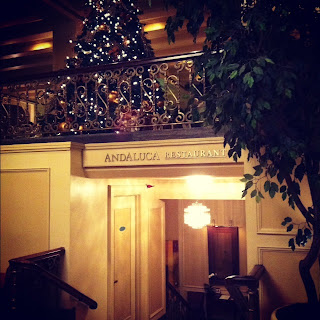 Andaluca Restaurant is located adjacent to the Mayflower Park Hotel (where we stayed during our recent trip to Seattle).

Instead of rushing back out to eat after our check-in at the Mayflower Park, we opted to dine at Andaluca. It was so nice to simply walk down the stairs and be seated at our table. Andaluca had a special that evening (all wines from Washington were at a 20% discount), so we chose the 2009 O'Shea Scarborough Chardonnay to kick things off. This wine release is aged 18 months entirely in neutral oak with barrel fermentation and is a classic oaky and buttery chardonnay. 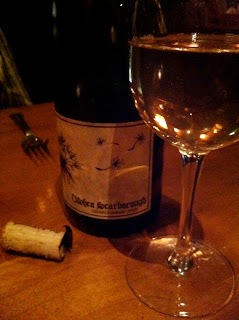 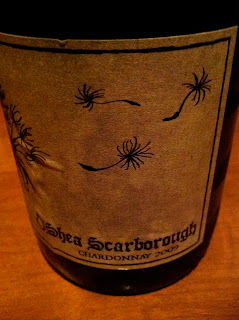 When it was time to order dinner, we opted for the special Prix Fixe "Tour of the Meditteranean" for $39 per person, so that we could taste a wide spectrum of the menu. It's a great deal because it includes a salad or soup, three small plates and a dessert for each person. 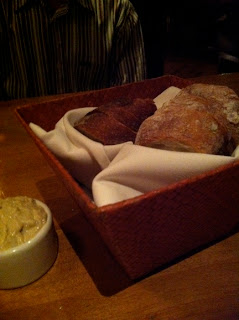 The beginning-of-meal bread basket comes with a ramekin of house made hummus. Hummus is real treat for me (because I really don't eat legumes anymore at all), but I didn't touch the bread. Instead, I used the hummus as a dressing on the salad I ordered. 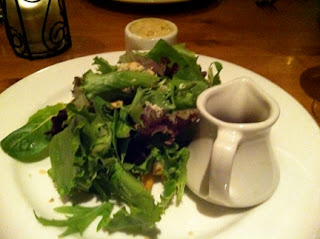 My salad was a Pear Salad with mixed organic greens, stilton cheese, hazelnuts, and balsamic vinaigrette. 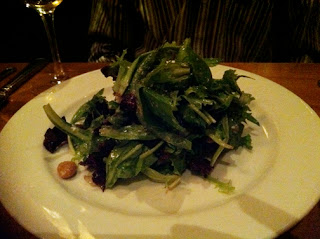 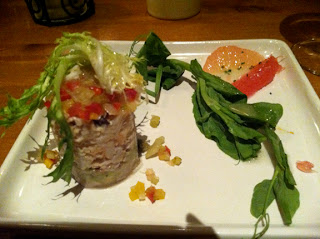 This is the mini crab tower with dungeness crab, avocado, palm hearts, and gazpacho salsa. 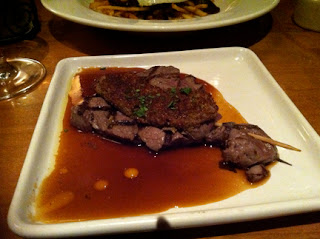 Then it was onto a Beef Tenderloin Skewer with a marsala demi glace. I really enjoyed this one! 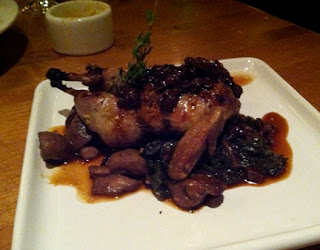 Next, I ordered the Grilled Quail with shallots, mushrooms, black currant jus. I had just had an exquisite quail appetizer at Hurley's in Yountville a few weeks prior, so I saw no reason to quit my quail habit anytime soon. It was cooked perfectly (it's a tiny creature and easy to overcook). 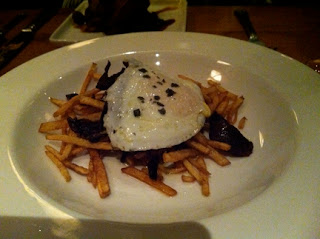 The BF ordered the Broken Egg Papas Frites made up of fried yukon gold potatoes, chorizo, and roasted mushrooms. I had most of the egg--I love dishes with runny egg. 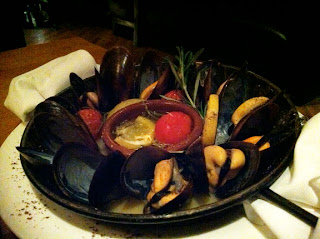 These are the Roasted Mussels with baby tomatoes, sizzling lemon butter, rosemary, lemons, and finished with white wine.  I have had my share of gamey, metallic mussels, but these tasted sweet and subtle. I would eat mussels all the time if they were more like these. 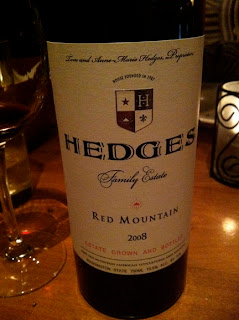 The next bottle of wine we tried (yes, bottle number 2, don't judge) was a 2008 Hedges Family Estate "Red Mountain". It is a blend of 36% Cabernet Sauvignon; 33% Merlot; 14% Syrah; 11% Cabernet Franc; and 6% Malbec. It was full bodied and a great pairing with our desserts... especially my cheese plate (pictured below): 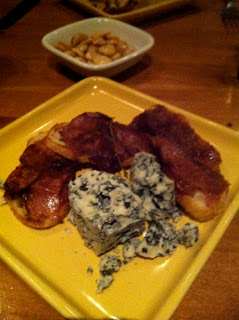 For dessert, I ordered the Cabrales Cheese Selection 1 oz. cow and goat milk cheese blend from the north of Spain, with a pear and almond compote. To my surprise, it was a blue cheese (my favorite!) 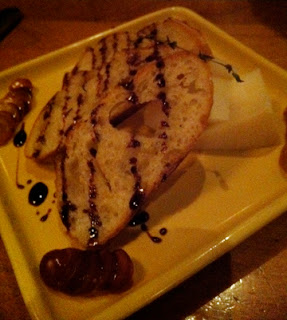 This is the Garrotxa plate that the BF ordered. It has 1 oz. goat's milk cheese from the Catalonia region with red wine tempranillo reduction and grapes and crostini. 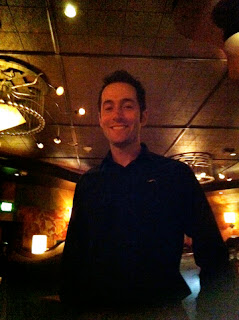 Meet our server, Chris. His service was exceptional at Andaluca. Since I had a gift card, he did not know he was going to be written about until I told him at the end of the meal and asked for his picture. He was very knowledgable about the menu and the wine list. Great job!


The head chef at Andaluca is Wayne Johnson. He has been at the helm since 1999. Some of you might have seen his appearance on Iron Chef America this year when he competed against Michael Symon. The secret ingredient was cucumbers! You can see video of the competition here.


If you're in Seattle or planning a trip there, Andaluca is not to be missed. You can find Andaluca on Facebook here follow them on twitter here, and visit their website here.
Love & Sugar xoxo cakegrrl2007