A Historical Dinner, Coming in January!

I am honored to let you all know about an exciting event taking place at The Roundhouse at the California State Railroad Museum on Saturday, January 31, 2009, from 6:00-9:00 pm.

It is the "Gold Rush: What We Ate" dinner. A unique evening blending history and food to celebrate the 160th anniversary of the 1849 California Gold Rush.

About the event's concept:
160 years ago, eager, gold-seeking “49ers” flocked to California in search of good fortune—and left behind a rich legacy of food and drink. Join us in an exploration of the Gold Rush flavors and dishes that characterized everyday life in the Mother Lode, and learn how California’s modern-day cuisine has been indelibly shaped by the vibrant diversity of these intrepid (and hungry) argonauts.

The event itself:
The evening will begin with a presentation by local Gold Rush historian James Henley, former manager of the Sacramento Archives & Museum Collection Center. Mr. Henley will speak of James W. Marshall’s discovery of gold at the American River in Coloma, and the historic tsunami of immigration that followed this quiet event. Nationally recognized food historian Ann Chandonnet, author of “Gold Rush Grub: From Turpentine Stew to Hoochinoo,” will then bring to life the culinary “landscape” of the era: the dazzling array—from dismal to swanky—of food and beverages consumed in the miners’ camps, taverns, boarding houses and hastily-constructed grand hotels. She’ll also discuss the contributions of Northern California’s Native American population, and the vital role of mule teams, pioneer grocers, and fancy imported foodstuffs.

The talks will be followed by a three course, historically accurate meal showcasing dishes consumed by the miners and denizens of California’s Mother Lode. Included in the meal will be a commemorative “California Common” beer (indigenous to America, and first produced in California during the Gold Rush) freshly brewed by the UC Davis brewing program in collaboration with Sacramento’s Brew It Up; and Boudin bread from San Francisco’s first sourdough bread bakery (established in 1849). The meal will also feature Barton & Guestier wine, from one of the oldest and most prestigious wine négociants in Bordeaux. Established in 1725, Barton & Guestier wines were some of the first imported wines to arrive in California during the Gold Rush. 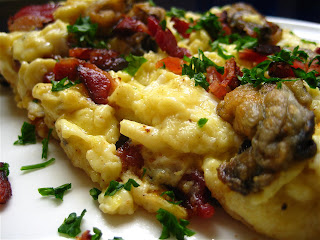 Hangtown Fry: Hangtown fry is a type of omelette made famous during the California Gold Rush in the 1850s. The most common version includes bacon and oysters combined with eggs, and fried together. The dish was invented in Placerville, California, then known as Hangtown.

Where:
111 I Street, Old Sacramento

The event begins at 6pm on January 31, 2009. You may arrive as early as 5pm if you would like to stroll through the California State Railroad Museum prior to the event at no charge.

This event is presented by California State Parks at the California State Railroad Museum and the UC Davis Robert Mondavi Institute for Wine and Food Science.
Love & Sugar xoxo cakegrrl2007