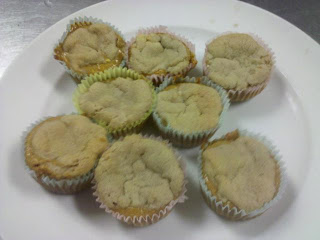 You’ll probably see a lot of pumpkin stuff on here over the next few months. Here’s something I made for a Monday Night Football gathering this week. I call it Cookie Dough Pumpkin Pies.
The dough is much like a snicker doodle and the pumpkin pie is pretty much a basic pumpkin pie recipe.

Combine remaining sugar and cinnamon in small bowl. Roll dough around in the mixture and set in the refrigerator to chill while you make the pumpkin pie mixture.

You will need a cupcake tin to bake these treats. Line the cupcake pan with cupcake papers and press small balls of dough into the bottom as a “crust”. Spoon a little of the pumpkin mixture into the liner almost to the top and then place another bit of dough on top of the pumpkin. Repeat this with all the slots in the pan and then bake for 30-40 minutes or until knife inserted near center comes out clean.