Of all the samples I took home, I have to say the Tahitian Gold Vanilla products were one of the most useful, versatile, and impressive. (Besides the Duff cake products I was lucky enough to snag from the man himself (yep, still starstruck)––but that my friends is another post to come!!) 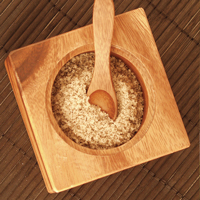 Tahitian Gold Company is a manufacturer of gourmet vanilla products specializing in authentic Tahitian Vanilla, the world’s rarest. Their tagline is "Think outside the bean." They are amily owned and operated, and source their vanilla beans directly from farmers around the world.


I stopped by their booth on day two of my visit, and once the representative found out that I, along with the person I was with that day, are chefs, he was filling our bags with things to try. So, far I have used the Vanilla Salt in almost everything I have eaten over the past three or four days. It is so delicious, and can really amplify and enhance flavor of many foods.

I have used it mostly on popcorn with a little mild cheese…Yuuumm.

But then I decided to use it as a seasoning when caramelizing red onions... it brings another level of richness to the flavor. I typically make the onions, add in the salt, then add balsamic vinegar and cranberries, and then bacon and lastly, turn off the heat and throw in some spinach--don't COOK, just to wilt the greens--now that's a party on a plate!! :)

I also use it in my cocoa/stevia mix in my coffee in the morning. Pinch of vanilla salt, 1 tablespoon of cocoa, and 3 packets of stevia.

I will probably try out the Vanilla Paste next. I would like to use it in a sauce... maybe with pork tenderloin and some dried fruit, but that's another day and another recipe. Stay tuned!

vanilla salt is something I can imagine J becoming quickly addicted to! lol!!