A Tale of Two Salads and More at Panera Bread...

When I hear the word Panera, I can't help but think of the band Pantera. Sorry, had to get my lame joke out of the way. Seriously though, the salad I tried at Panera Bread yesterday was "headbanging" with flavor! 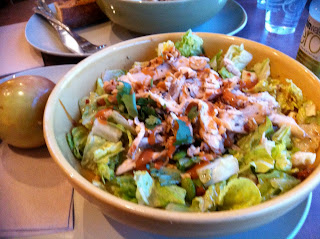 It's the new Thai Chopped Chicken Salad with only 390 calories and 33 grams of protein. It has romaine lettuce, wonton strips, a mix of vegetables: red bell peppers, carrots, and edamame, and grilled chicken. Cashews and fresh cilantro top it off with a Thai-style peanut drizzle. The salad is also dressed with a "Thai Chili Vinaigrette", a low-fat vinaigrette with lemongrass and red chili flecks, toasted sesame oil, kaffir lime and soy sauce.

I meant to order my dressing on the side, but since the whole thing only has 390 calories and this was the first thing I had saddled up to eat yesterday besides fruit, I just went with it. I especially liked the edamame. It is one of my favorite snacks, so I was happy to see it make a cameo in the salad.

I don't patronize a lot of chain places--not even for coffee, and so it was a little odd to me (in a good way) to see all the calories on not only the healthier menu items, but on all the baked goods as well. I find this very useful for people who really want to make better choices. Like me! Thanks, Panera. 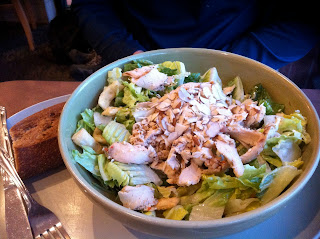 This is the salad my friend ordered, the Asian Chicken Salad. It has chicken (naturally), romaine lettuce, fresh cilantro, sliced almonds, sesame seeds, crispy wonton strips & reduced-sugar Asian sesame vinaigrette. I have to say that both salads were rather large (so you could opt for half, as this is a choice on the menu). They were served on REAL plates which made them very inviting. I liked that they weren't served in a plastic container (though I did need one to take the other half of my salad home).

If you aren't into the sesame/cilantro/wonton fusion thing, there are other salads like the BBQ Chopped Chicken, Grilled Chicken Caesar, Chopped Chicken Cobb, or Fuji Apple Chicken. But I hope you like chicken... ;)

Another thing I "like" about Panera and their salads is that they come with your choice of an apple, a mini-loaf of bread, or a bag of chips. Yes, I had to cut my apple with a butter knife so that the peel wouldn't get caught in my teeth. It's just hard to be me sometimes. ;)

And it's Baa--aack!! The Trail Mix Bagel, filled with apples, bananas, cherries, cranberries, peanut butter-flavored chips, cinnamon chips, maple bits and raisins, and a topping of honey-roasted sunflower seeds (sheesh!), returns to the menu. I am told this bagel is best enjoyed toasted because when heated, the peanut butter chips melt. Sounds like something I need to avoid! ;)

Finally, from March 11-17, Panera will offer their take on a St. Patrick’s Day favorite, Irish Soda Bread. They add currants and a hint of caraway to their recipe. Sounds pretty shamrockin' to me...

But until then, if you are looking for a fast and filling meal, the Thai Chopped Chicken Salad or the Asian Sesame Chicken Salad are two great options. Which one will you choose? Is it lunch time yet? Who's on first?

PS: You can follow Panera Bread in all of their doughy goodness on twitter here.
Love & Sugar xoxo cakegrrl2007