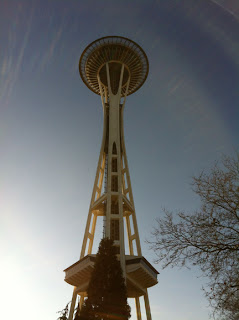 Ah Seattle. Good times. We'll definitely be back. And most likely, we'll again stay at The Mayflower Park Hotel, a 75 year-old gem in uptown Seattle.

The hotel began as the Bergonian Hotel on July 16th, 1927 and has been in constant operation ever since. It was designed by B. Dudley Stuart and cost $750,000 to build. The name "Bergonian" came from the hotel's then proprietor, Stephen Berg, who was a prominent builder at the time.

Here's a picture of the lobby and reception desk inside the hotel, which has been restored with crystal chandeliers, brass and period antiques. 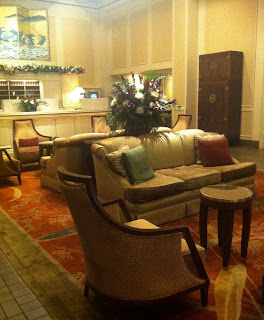 In 1974, Birney Dempcy formed a limited partnership to purchase the hotel. At the time, it had been foreclosed upon and was very run down. Birney renamed the hotel The Mayflower Park awaiting the development of the city's Westlake Park.

Following major renovations in 1976 and 1988, the Mayflower Park is always being upgraded and refurbished to keep it as beautiful as it was when it opened in 1927. Recently, the hotel was recognized as one of the Historic Hotels of America because of it's history and architecture. The Mayflower Park prides itself on being "quite simply, one of a kind" which has become their marketing slogan.

Their logo and marketing pieces are quite beautiful, and here is the
little welcome present that was waiting for me in the room. 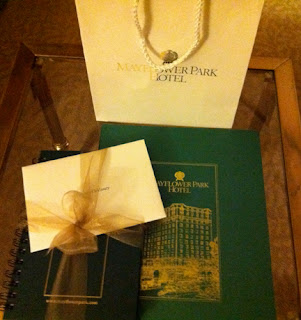 Tea, fruit and nut mix, and chocolate truffles were in the bag. 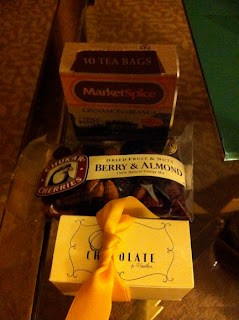 Our room was so comfortable, had 2 televisions, and had the option of converting into two rooms by a sliding door. The couch in our suite's main room could be pulled out for extra guests. 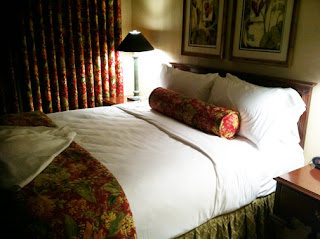 We stayed on the ninth floor, and it provided a fantastic
view of holiday lights and activities going on below us. 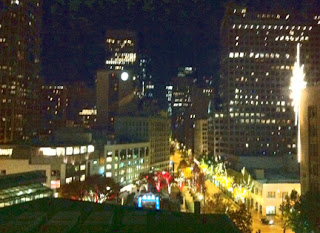 One amenity I always look for in a hotel is the fitness room. And Mayflower Park's is located on the third floor. It is equipped with 2 treadmills, a stairclimber, and 2 stationary bikes, as well as a set of free weights I found very useful. The BF would run outside and I would retreat to the workout room so that later in the day we were free to enjoy our meals at Andaluca, Place Pigalle, and Fall Line Winery. 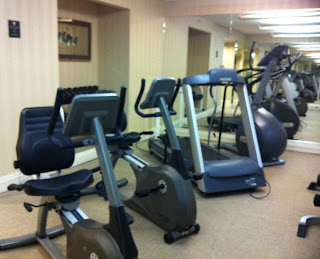 Here's another shot of the lobby. There was a Christmas party
in the room upstairs on one of the evenings of our stay. 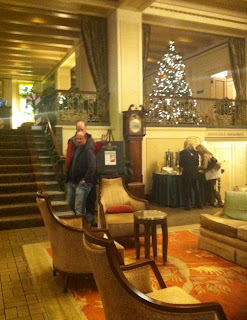 This is inside Oliver's, the bar in The Mayflower Park. The spot used to be one of the first Bartell Drug Stores, since the hotel was built during Prohibition and no areas were designated to serve alcohol. The dining area of the hotel was a coffee shop located where Andaluca is now, and in part of that area, Andaluca once lived as a barber shop. Prices in the 54-seat coffee shop ranged from 10 cents for coffee, to 20 cents for chicken broth, and $2.00 for a sirloin steak. Oliver's (shown below), opened in 1976 and became Washington's first "daylight" bar. Prior to that, Washington had "blue laws" that prohibited anyone from looking into a lounge where hard liquor was sold. 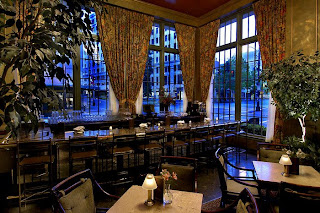 The huge windows and lights outside made it such a romantic place to be.
Here's another shot from where I was sitting. 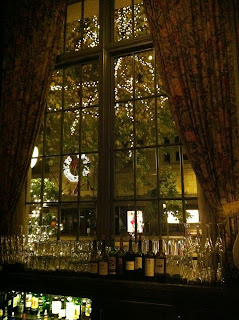 Oliver's features a special cocktail called The Golden 27, honoring the year the hotel originally opened as the Bergonian. Here's the recipe:

Golden 27
Half fill a mixing glass with ice, then add 1/4 oz. Lemoncello Lemon Liqueur, 1 1/4 oz. Ketel One Vodka, 1 oz. Bombay Sapphire Gin, and a pinch of Gold Luster Dust. Shake vigorously and strain into a chilled martini glass. Garnish with a lemon twist.


Following dinner on one of the nights of our stay, we had dessert in our room. I found just what I needed on the room service menu... my favorite: fruit and cheese!! 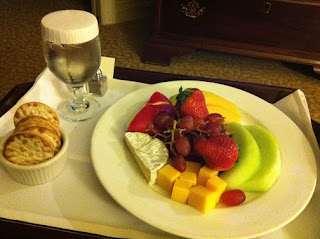 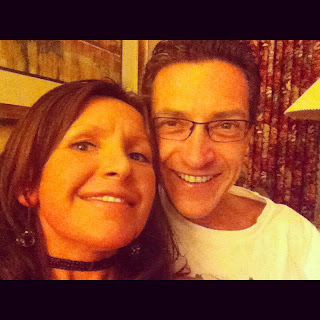 So many happy memories and so much fun in Seattle. Thank you to all my advertising partners!


If you are planning a visit to Seattle, please consider the Mayflower Park hotel. They've got a few ongoing specials including one for New Years and in 2012, they are teaming up with the Seattle Art Museum during their showcase of Paul Gauguin. 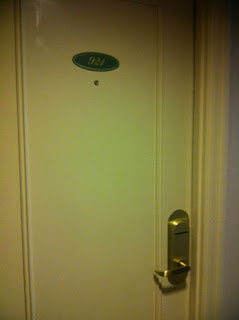 You can find The Mayflower Park Hotel on twitter here and their Facebook page is here.
Love & Sugar xoxo cakegrrl2007