Ending the Year in Oakland: Yoshi's, Brian Culbertson, and the Waterfront Hotel! 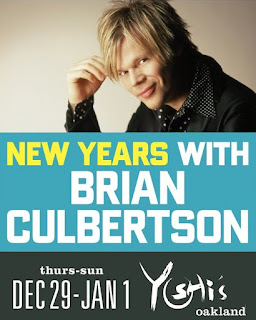 Last Thursday, the BF and I traveled to Oakland to see one of our favorite musicians Brian Culbertson play at the famous Jack London Square establishment, Yoshi's Jazz Club. During the trip, we stayed at the Waterfront Hotel conveniently located one block away.

When we arrived at Jack London Square, our first stop was a check in at the Waterfront Hotel. It's a part of the Joie de Vive chain, and a lovely nautical-themed place to stay...even the hotel key folder has a tie-in to the sea: 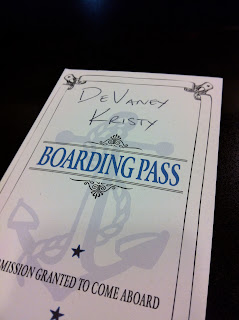 Here's a picture of the fireplace in the lobby. The lobby itself was handsomely decorated and welcoming. Although the weather was unseasonably warm, the fireplace was alive with dancing flames. 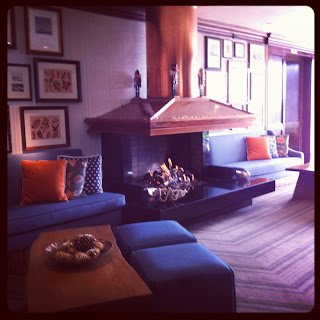 You'll be seeing quite a lot of these doors on my website. I have decided to take a picture of all the room numbers/door facades, just as I keep all the corks from the wines we drink on special occasions. :) Room 234 this time! 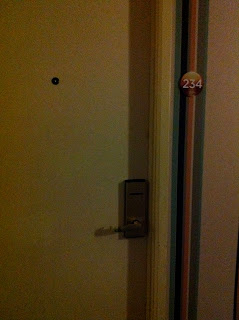 Here's a shot of the bed and and the interior of the room. As you can see, the color scheme stays loyal to the nautical theme of the hotel. 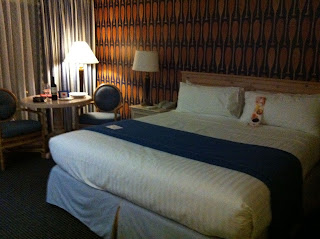 And surprise, surprise... how did they know I am such a little cheese lover? The staff at the hotel left this for me and my stunning companion to share. Brownie points! 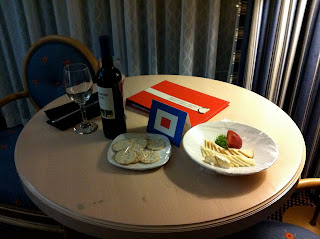 There is a heated pool, a 24-hour sauna, and an on site fitness center, as well as complimentary Wi-Fi available throughout the hotel.

After exploring the hotel and our room a bit, it was off to Yoshi's Jazz Club for the best seafood and sushi in Northern California and one of the most memorable concerts I have ever seen!! 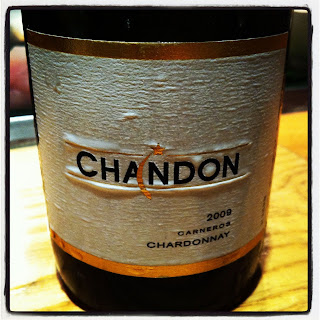 Because the BF and I love Yoshi's and are big fans of Brian Culbertson, it was time to celebrate with Domaine Chandon Chardonnay! I just love a Carneros Chardonnay. :) You bet I kept this cork. 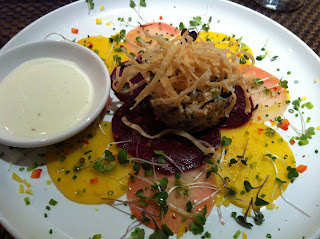 This is probably one of the prettiest and most wildly delicious dishes I have ever had. It was the Dungeness Crab & Beets salad with asian pear, tobiko, crispy gyoza, and creamy wasabi puree. The crab was so fresh and clean and the beets just melted in my mouth. The plate was equally pleasing to the eye. 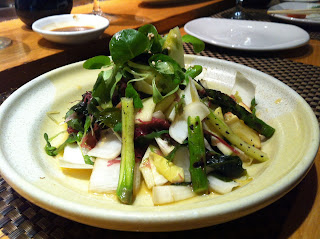 My BF enjoyed this salad, with grilled asparagus and seaweed accompanied by apple, mache, kaiware, and a citrus genmai vinaigrette. It was recommended by a patron who was sitting at the sushi bar next to us. 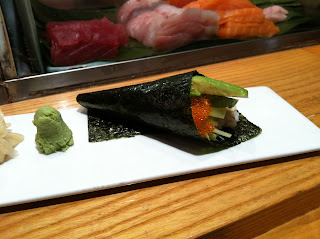 Then I ordered a handroll version of the California King Roll. Why? Because I don't eat rice. :) It was packed with dungeness crabmeat, avocado, cucumber, and tobiko. It's pretty easy to eat healthy/clean at a place like Yoshi's. 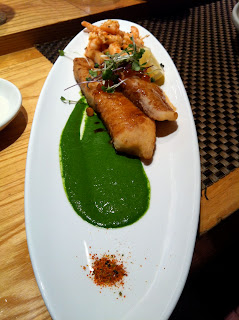 The BF ordered this for his main dish. It was the sautéed tilapia, with 6 ounces of  butter-poached shrimp, ikura, english peas, spinach puree, meyer lemon soy. Yoshi's really does everything perfectly, especially the plating. Really beautiful. 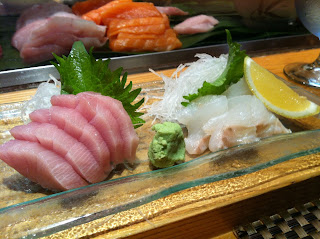 And a little sashimi to finish things off...

Soon after our meal, we were seated at table 46 in the intimate showroom at Yoshi's. Every seat in the house is great, and as you can see below, I was able to take some pretty good shots of the band playing with my iPhone from where we were sitting.

I was a Brian Culbertson fan before, as I have seen him play in my hometown, Dayton, Ohio many years ago, as well as this summer at Mix in downtown Sacramento when he showed up out of the blue to play with my good friend and talented artist, Cecil Ramirez. 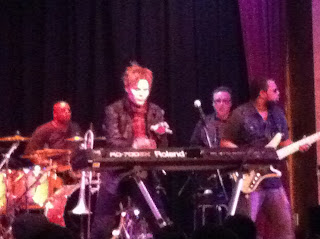 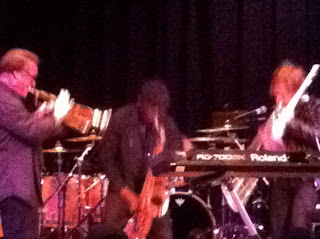 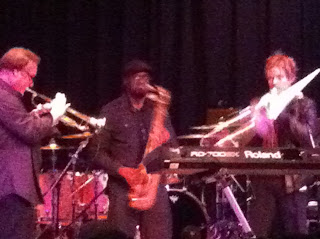 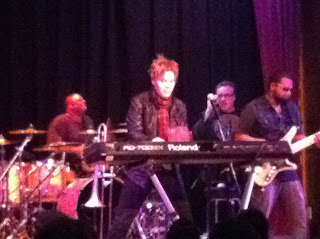 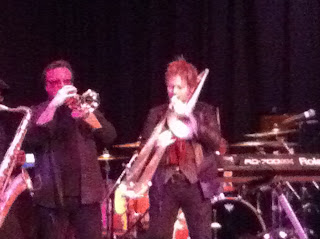 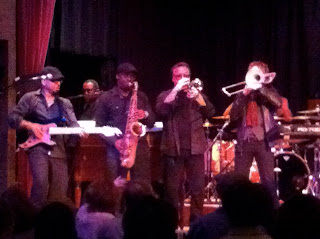 I am really looking forward to this year's wine and concert series with Brian Culbertson in Napa Valley. It's called the Napa Valley Jazz Getaway, and if you love wine and jazz, you won't want to miss it! It spans from June 7th-10th, 2012, and my birthday just happens to be tucked in the middle of that date range. :)

The next morning in the hotel, we grabbed some fruit, bacon, and sausage from the free buffet downstairs, before we both set off for our morning runs (his through the streets of Oakland, mine at the workout facility at the Waterfront). 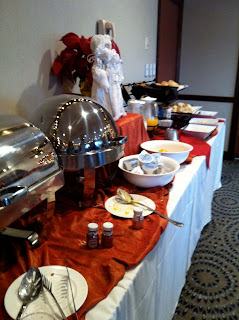 After my workout, I snapped some pictures of my view from our room. As you can see, The Waterfront has a great pool area and spectacular views. 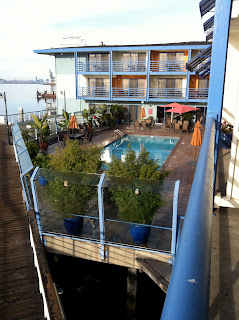 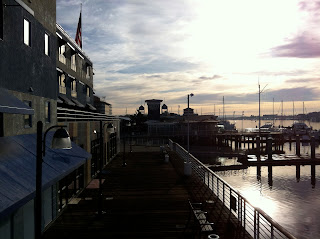 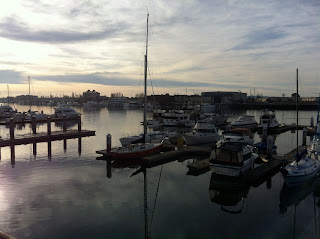 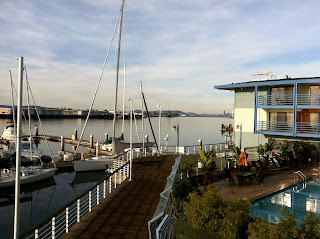 Later that afternoon, my BF and I visited a winery located in Alameda, that is housed in a converted 40,000 square-foot airplane hangar. Rockwall Winery is located on what was once a Naval Air Base. Also known as Building 24, the hangar is due north of a defensive rock wall which made up the perimeter of the base.

Of course, the winery takes its name from the wall, and the winery building has been retrofitted with the latest winemaking equipment.

The winery building is also a hub to taste other winemakers' offerings such as: RB Cellars, Carica Wines, Blacksmith Cellars, and Ehrenberg Cellars. 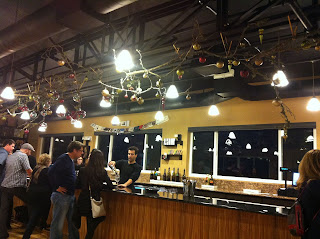 The tasting room... I loved the branches hanging in the rafters with the Christmas decorations on them!

We walked away with a case of wine... my favorites from what we tasted and of course my recommendations to you if you have a chance to try them: The Improviser from RB Cellars and Rockwall's 2009 Chardonnay Russian River Reserve Lone Oak (disclaimer: this one is buttery and oaky!!). Rockwall Wines tasting room is open Thursday-Sundays from 12-6pm.

Thank you, Oakland!! Our visit there was excellent, and we'll be back soon! :)
Love & Sugar xoxo cakegrrl2007

Hello...I was at the same concert, for 3 nights (Thurs - Sat/NYE). The best nights of 2011 for me. I also got to see the rooms @the Waterfront Hotel, since a friend of mine was staying there. You're right...their gorgeous! Down comforters, fireplaces and even a Keurig coffee machine...Wow, can't get any better!! I'll follow you on Twitter now! I'm @Bevstwit Thanks for your review of Brian Culbertson's shows!