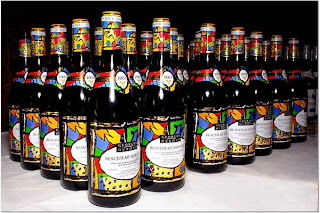 The “Fête du Beaujolais Nouveau” will be celebrated Saturday, November 22nd from 6:30-9:00 P.M. at the Solomon Dubnick Gallery in Midtown Sacramento. Cost is $25 for Alliance Francaise members/$30 non-members/$35 at the door and includes a complimentary glass of Beaujolais Nouveau. There will be a silent auction to benefit the Alliance Française de Sacramento & the “Maison de la France” Building Fund. Exceptional auction items include “one week in a 9-bedroom 18th C town home in the walled medieval French village of Domme” and “Lunch with SacBee sports writer, Ailene Voisin”. Sponsors include the Solomon Dubnick Gallery, French Touch Productions, midtowngrid.com and TV5 Monde.

KCRA 3 reporter David Bienick will host as the Master of Ceremonies for the evening.

Beaujolais Nouveau is a young red wine produced in the Beaujolais {BOE-zjoh-lay} region of France. At the strike of midnight, this wine is officially released for sale on the third Thursday in November. In 2007 nearly 10,000 people from around the world gathered in Beaujeu, France to celebrate the uncorking ceremony. Grapes in this region, along with Champagne are unique in that they must be hand-harvested. The traditional slogan, “Le Beaujolais nouveau est arrive!” was changed in 2005 to “It’s Beaujolais Nouveau Time!”. In other words, it’s time to celebrate-- French-style! Come join the party!

Every year around the world the party begins on the third Thursday in November. At the stroke of midnight the cork is popped and the 2008 Beaujolais Nouveau takes a bow. The long awaited release of the year’s Beaujolais Nouveau is the best time to toast with gusto all things Gallic and gastronomic.

There are about 120 festivals that pay homage to this wine release—and that’s in the Beaujolais Region alone. In 2007 nearly 10,000 bombarded the small town of Beaujeu to be part of the uncorking ceremony. Globally, the celebration is a much-anticipated event and in the U.S. that’s no exception. In every region in our country festivities are planned to celebrate the annual release of this red wine made from Gamay grapes that is produced only in the Beaujolais region of France.

A young, fun and not-too-complex wine, Beaujolais Nouveau is ready to open just 6-8 weeks after production and is best enjoyed within the first year.. In the early 1960’s the Vintner Georges Deboeuf saw its potential as a profitable and promotional enterprise and thus began the race to Paris carrying the first bottles of the newly released vintage.