This year, not only were there so many really nice vendors, but there were a lot of great products. Instead of doing a product roundup all in one post, I thought it might be nice to showcase my favorites in a series of posts.


So, I'll start with Sweetleaf. Sweetleaf is the name given to the Stevia sweetener that Wisdom Natural Brands produces. Their marketing people contacted me pre-show and asked if I would stop by their booth. I am always interested in safe ways to cut sugar/calories from my diet, so I took a minute to chat with Sweetleaf's founder, Jim May (pictured below). I was surprised to learn that Mr. May is actually the person who first brought Stevia to the United States! 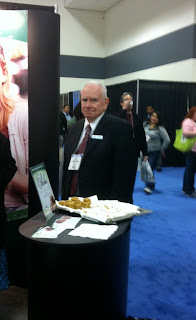 After tasting stevia leaves given to him by a Peace Corps worker, May made it his mission to bring the extract from the plant to the United States.
May immediately invested nearly all of his (and his wife’s) life savings to manufacture and market stevia leaf products and stevia extracts. Making his first trip to Paraguay a few weeks later, he wanted to learn everything he could about the native South American plant with the incredibly sweet leaves that had so impressed him.

The process involves taking the highest-quality leaves of the stevia plant and extracting their naturally sweet taste with only cool, purified water – no chemicals, solvents or additives that adulterate and cover up the great taste created by nature.
Because his company uses only water in their extraction or purification process, there is no waste whatsoever. The leaf residue becomes cattle feed or ground mulch, and the spent water is distributed to local farmers to irrigate their fields. 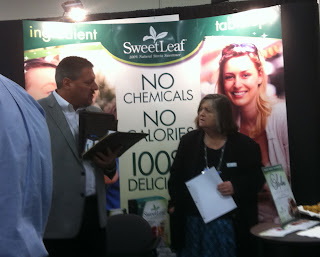 “Today’s wise consumers are looking for a high quality tabletop sweetener that has low calories and low carbohydrates to replace artificial sweeteners, while food and beverage producers are looking for a high intensity sweetener to replace aspartame, sucralose and high fructose corn syrup,” states May.
Wisdom Natural Brands, a leading U.S. manufacturer of stevia products, offers SweetLeaf Sweetener in convenient double-serving packets. SweetLeaf Sweetener is sold in boxes containing either 35 or 70 packets. Each packet replaces two teaspoons of sugar. Today, May is a leading expert on stevia and travels across the world promoting the benefits of the stevia plant.
For more information, visit www.wisdomnaturalbrands.com.
Facts about Sweetleaf Stevia:
Here's a link to some recipes you can make with Sweetleaf Stevia. One of my favorite products they make is the liquid drops (pictured below). It only takes 1-2 drops to sweeten a cup of coffee and they have some really delicious flavors. 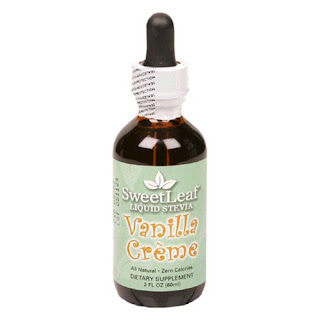 You can follow Sweetleaf on twitter here, and "like" them on Facebook here. More from the SF Fancy Food Show to come next week... including a post on Ace of Cakes' Duff Goldman!! I got to meet him!! Wheeee....
Love & Sugar xoxo cakegrrl2007